Starting in WLED 0.9.0, Segments are supported.

This feature allows you to set different zones on the LED strip, each running a different effect or color.

A segment is selected if the checkmark next to the segment number is checked. Changes you make to color or effects will apply to all selected segments. The color/effect that is shown in the web UI is that of the first selected segment.

There is one main segment, Segment 0 by default. This segment has a few important differences to the rest of the segments. - Color transitions only work on the main segment - The main segment's color is the one that will be reported to HTTP and MQTT APIs

Tip: If you divide your strip into two segments, reverse the second one and select both, you can achieve very nice symmetrical effects!

Segment 0 has a Start LED of 0 and a Stop LED equal to the LED Count you defined in Configuration, LED Preferences. The Stop LED is not included in the Segment. Currently you can create a maximum of 10 segments. Presets 1-15 use only Segment 0 by default. Preset 16 is the only Preset that saves settings for Segments 1-10.

To illustrate this, we can create a segment with 12 LEDS (physically referred to as LED 0 to LED 11) and select an effect that repeats three colors. When Grouping is set to one we see a repeating pattern of one red LED, one blue LED, and one green LED. When Grouping is set to two the segment of 12 physical LEDs becomes a segment of 6 virtual LEDs (virtualLED 0 to virtualLED 5). The same effect will now set the color of each virtual LED (which consists of two physical LEDs). The pattern becomes two red LEDs followed by two blue LEDs then two green LEDs.

As the pattern cycles, the group of LEDs will move together.

Spacing controls the space or gap between LEDs. The default spacing is zero, so normally there is no space between LEDs. When Spacing is set to one, every other LED will be lit. The number of virtual LEDs in the strip will be half the number of physical LEDs.

Grouping and Spacing can be combined to create many different custom LED layouts. In the example below, the strip of 12 physical LEDs has been configured to function as four virtual LEDs with a small gap between them.

This is an easy way to get a repeating pattern of colors using one segment per color. 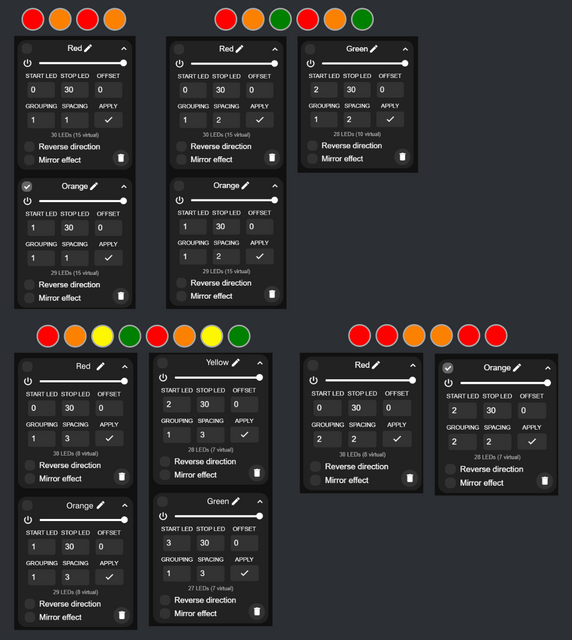 Offset in a segment

By default effects start in the first LED in the segment and finish in the last one. If the offset parameter in a segment is used, the effect start will be moved by the number of positions entered. It will continue to the last LED and then finish with the initial positions that were skipped.

For instance, let's assume assume a strip of 12 LEDs with the positions numbered as follows (like the examples above):

An offset value of 5 will make the effect start in the physical position 5, continue to position 11 and then finish with positions 0 through 4, like this:

A negative offset value is allowed and represents an offset starting from the last position in the segment. In our previous example, an offset of -2 will start the effect in position 10, like this:

The offset values is prioritized over grouping and/or spacing. For example, if the offset is 2, grouping 4 and spacing 1, the first group of 4 LEDs will start at the physical position number 2.